Showing posts from March, 2013
Show All

Towns of the Lachlan: Day 3 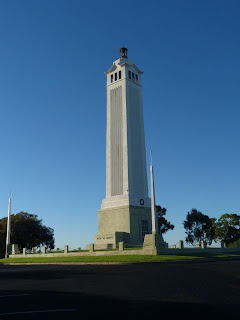 Actually this starts late afternoon on Day 2 when we arrived at the campground in Parkes, rented a site and got the tent out just as it started to rain.  So that is one tradition in hand.  The second tradition is that every peg seemed to hit a rock and bend as I tried putting them in.  Much bad language was used I am afraid.

We ate our evening meal sitting in the car munching on prawns, with me being very negative about the town of Parkes and its poxy weather.  We climbed into our sleeping stuff about 8:30 and found the rain stopped just about then.  We had a reasonable nights sleep until about 6am when we got up and made some coffee.    Apart from the crappy weather, days are now getting short so the sun didn't really rise until after 7 which made serious packing a bit difficult   However we had everything stowed away by 8am and headed for Memorial Hill.
Here is the view from the hill.  Rather flat isn't it!  That is why the Region is called the Western Slopes and Plains.
The…
Post a comment
Read more

Towns of the Lachlan: Day 2 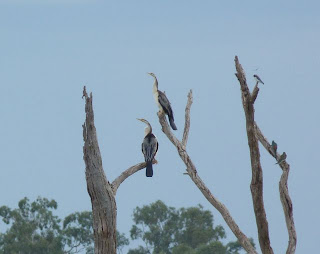 The tempest died down about 11pm and the day that dawned was merely warm rather than broiling.  We had a relaxed breakfast and a good chat with Dennis a resident of the caravan park who knew a fair bit about the birds of the area.  We decided that a relaxed day going along the river to Condoblin and camping at Parkes was the go.

Our first stop was back at the hide overlooking the old poo-pits was the go.  Theer was a reasonable amount of action there with the old dead trees being an attractive perch for Darter, White-breasted Woodswallow and Red-rumped Parrot.
We then moved out further around the Lake to another hide where we could see astonishing numbers of Darters on the stumps in the water.
As with the venue, closer to town this was built by the local Men's Shed.  They have a logo, and deserve a pat on the back!!
A strange sight was visible in the distance.  The tops of the towers didn't look like floodlights for a sporting arena (and what sport could afford facilities like…
Post a comment
Read more
More posts