Showing posts from July, 2013
Show All

Hopefully back on air

July 26, 2013
Google appeared to kill this blog as a result of detecting some suspicious activity.  Hopefully I am now back on track although will not be posting much more for the next few days. 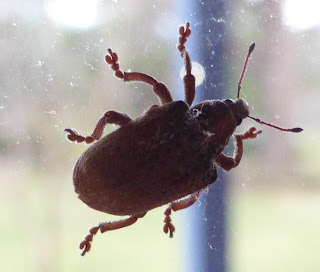 I think this little insect crawling on my study window is a weevil.  The top view interested me with the detail of the legs.
Being on a window I was able to also get a shot of its underside!
My attention was then drawn to the cacophony of a flock of about a dozen Yellow-tailed Black-Cockatoos feeding down by the Creek.  A large, loosely held flock has been around for several days.  (When the components all coalesced last weeks I think there were about 120 birds in total.)  This one was being raucous in a red box.
These were feeding on the cones of a nearby Pinus radiata: notice the ripped off cone held by the upper bird.
This species is one of the few thought to have benefited from the vast pine plantations strewn around SE Australia in the recent past.

July 16, 2013
While I have commented occasionally on political matters on this blog I have not, until now, given religion any blogtime (one doesn't need to, they have enough nuns, monks, priests, vicars, bishops and talk-back radio hosts to look after that).

Of course some politicians do make a point of their faith, even ones who admit to telling porkies to win their case.  The politician covered in that link is widely known to be a staunch Catholic.  While that is not a description that has ever been attached to me (I'm a lapsed Anglican at the strongest) I see that as his business and probably reckon it is good that he's out of the closet on that one at least!

So we now find the same politician objecting to Emissions Trading as a ''so-called market in the non-delivery of an invisible substance to no one''.


Lets have a slightly re-ordered  look at the components of that statement:
"a so called market": a market is simply a system for trading.  Very few people wo…
3 comments
Read more 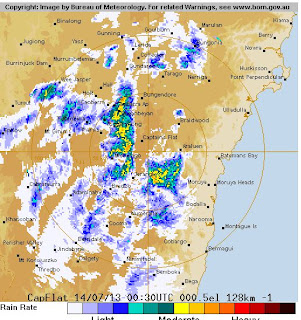 I was expecting to do a post about a visit to the National Arboretum but unfortunately the weather was not propitious.  When we took Tammie for her exercise it was still pretty foggy when we returned so I thought we'd wait until that lifted, and hopefully get in a stroll before the promised rain arrived.

Here is the 128km radar image at about 10:30 our time (I was stirred to look at it by a few 'tings' on the roof  which sounded rather like raindrops).
The recent radar seminar didn't mention one innovation I have discovered, which is the 64km screen: perhaps it has been there all along?  We are right on the edge of the straight N-S line.
The doppler screen suggests the is a fairly brisk NW wind driving the system towards us.
So the walk was cancelled.

Before that I had had to deal with a small issue with some of Frances' camelias.  They were getting munched
but we weren't sure which phylum was responsible (the principle suspects being Arthropda or Chordata).  …
4 comments
Read more

Dux of the Dam 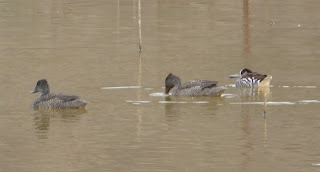 Being at the Bungendore cultural centre (aka the tip) this morning I diverted past the Big Dam on Lake Rd on the way home.

There is still a fair surface area of water, although a lot less than a year ago.  The same applies to waterbird numbers.  I tested out the new camera in what was rather trying circumstances on a small flotilla of Freckled Ducks and Pink-eared Ducks.
This was at least 50m range in overcast conditions with reflective water as a backdrop so I reckon the image passes.
What makes it particularly interesting, and should be visible if you click to enlarge the second image, is that the pink ear is visible: it isn't big but it is visible.  I still reckon they should be called Zebra ducks!

I saw at least 5 Freckled Duck and estimated 30+ Pink ears.  Also obvious were a pair of Australian Shelducks, and the usual Australian Wood Ducks, Pacific Black Ducks and Grey Teal.

Definitely not a duck, but when this Eastern Spinebill posed nicely outside my study window I could …
Post a comment
Read more 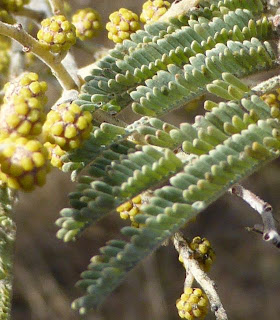 .. something good.  Rather than Natalie Wood, or the Lincoln Centre (which replaced San Juan Hill, the setting for West Side Story) the 'something good' heading our way is Spring!!!!

There are a few buds around the block and in some cases suggest it is going to be a colourful season.

Acacia dealbata. Acacia buxifolia Acacia rubida This second image of A. rubida shows the density of buds on the shrub. This is one of thecommon plants to have grown from the direct seeding by Greening Australia in 2007. Acacia pravissima: this species - a 'foreigner' to the area - is also covered in buds and will make the customary yellow approach to our drive in a month or so.
Also a foreigner, bud (a typo deliberately left) not so colourful, is Eucalyptus viminalis.  The most noticeable characteristic of this forest tree is the ribbons of bark, but when looked at closely the buds are most attractive.
The locally native eucaylpts are also getting hot to trot.  This is E. mannifera ..
.. while…
Post a comment
Read more

ANPS Reserves no Brooks, but quite a Hill 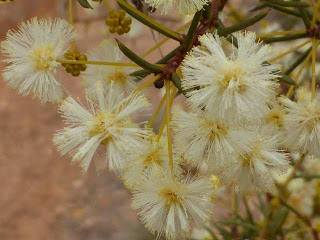 So today we met at Brooks Hill Reserve near Bungendore.  According to my records our database entries for this reserve start with a walk on 20 November 1996, but a founding member of the group said that they used to walk here earlier than that, but the plant lists were not kept in the same way.

As the official report notes there wasn't a huge amount of flowering around today but the Acacia genistifolia made a nice show in places.
Incidentally that photo was taken on my new camera: pretty good recommendation by Roger!  Had I believed them when they said "battery requires charging" all photos would have been taken on that, but Frances smaller version (used by me) did a pretty good job as pinch hitter.

These flowers of Eucalyptus rossii were waving around above head height so difficult to snap, but there was so little in flower I thought a 'record shot ' was all that was needed.
Chrysocephalum apiculatum was lower and more cooperative.  I suspect these are hanging o…
Post a comment
Read more
More posts