Showing posts from September, 2015
Show All

ANPS gets close to L*ons and into Farrer 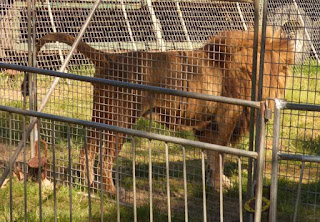 OK.  Getting to the venue.  Here is the approximate route.
There were many good views to the West ...
.. and North.

Once out of the worst depredations of the Sparks and Wildfires Service there were masses and masses of flowers.  This shows some Indigofera and Stypandra.
OK, again, already!  Lets get up a bit closer to the plants.  Stackhousia monogyna was present in vast amounts: enough 'candles' to light up a Liberace concert!
Leucopogon attenuatus was getting a tad over.
On the other hand some L. fletcheri was very fresh looking.
Sticking with the white goods Drosera peltata had quite a few flowers.  Some of them were a tad pinker than this.
Pimelea linifolia.
Poranthera microphylla
Stypandra glauca came in two flavours: large serves of the traditional blue ...
... and a sample of the new improved white!
Kunzea par…
Post a comment
Read more

A few exotics from the garden 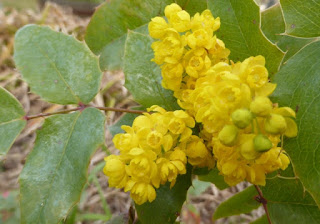 Some friends have surrendered their house to the ACT Government under the Mr Fluffy scheme. It is thus likely that the entire block will be graded to bedrock and their entire garden trashed.  Thus, before they moved out they invited friends and acquaintances to remove what they fancied from the garden.  We took a couple of boot loads of stuff.  Some of it hasn't survived my gentle ministrations but overall it is doing well.

I have been very surprised by the pretty flowers on the Oregon grape (Mahonia aquifolium). The blueish berries will be a bonus later in the year.
The other real exotic, which was a surpise last year, is a Euphorbia (possibly E. wulfenii).
My previous encounters with this genus were in Tanzania, where they were more like moderate sized trees.  This one, a different and unknown to me species, was at Seronera Lodge in the Serengeti. Slightly less uncommon, but really no less exotic to the Australian context, are the following 'pretties':
Bluebells Tulip 1 Tul…
Post a comment
Read more

Spring hits its straps in Carwoola 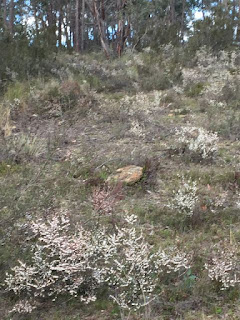 The Leucopogon fletcheri is is full flower now, forming drifts on the un-Kunzead slopes of our block.
In the cleared areas Early Nancys (Wurmbea dioica) have formed carpets.  Looking at the swollen gynaecia on this stalk of flowers they are getting close to the end of their cycle.
As noted, the little blue orchids (Cyanicula caerulens) have done their dash,  However the big mauve ones Glossodia majorare taking up the slack.
I have struck out the "scientific names" for these two species of orchids because no one seems willing to make an authoritative statement as to what is which, so I'm sticking with what I can see.  (Of course, they don't concern themselves with vernacular  names, so there isn't a good set of them.)  If the scientists stop behaving like preschoolers perhaps I will revisit this situation.

I am monitoring the display of big mauve ones as I did last year.  That will result in a post in about 3 weeks time when they retire for the year.  On the way b…
2 comments
Read more

September 26, 2015
I seem to have been having a good run with books recently.  Possibly because Frances has been finding goodies and passing them on.

The first is "The Longest Climb" by Dominic Faulkner.  This is the story of an expedition he led to travel by human power from the lowest point on the (dry bit of) Earth's Surface to the highest point.  This went on mountain bikes from the Dead Sea via Syria, Iran, Pakistan and India to Nepal and obviously to Everest.  I gritted my teeth on seeing the endorsement by Bear Grylls (since I reckon him to be an onanist of the first order) but thought the forward by Sir Ranulph Fiennes was more promising.

In fact it is very good.  He makes it clear that he has the training to do this (via service in the UK SAS - surprisingly, with Mr Grylls) unlike Eric Newby in A Sort Walk in the hindu Kush who pretends to be a wimp but actually has a very tough background. 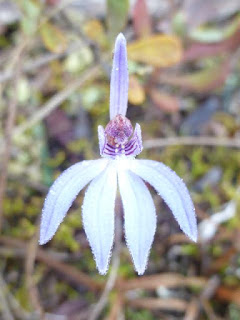 About 3 weeks ago I posted about the emergence in 2015 of Cyanicula caerulenson our block.  I have been checking the number of flowers each day (that we have been around) since.  After our trip to Lake Cargelligo caused a brief hiatus, my visit to the orchids yesterday was the finale for the year: only about half the number found and quite a lot of them were very sorry.  So its time for a comparison with last year.

Before doing that here is a picture for those who don't know what a Cyanicula caerulens looks like!
There are 3 main sites for the plants on the block, plus a few outliers.  When I posted about these flowers last year an emailed comment was positive about it saying that it formed a good benchmark.

Once one has a benchmark, one compares things to it!  So, this chart shows the total number of flowers I counted in 2014 and 2015.
I have used a 4th order polynomial to summarise the data: the values of R2;above 0.9,  suggest the curve fits the data pretty well.  Several poin…
Post a comment
Read more
More posts