Showing posts from June, 2017
Show All

On Owls and Owling 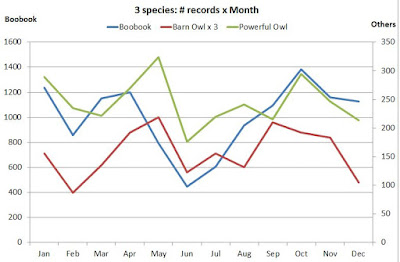 Some years ago Birds Australia published research that appeared to show that Boobooks were threatened in Australia.  Knowing, from McComas Taylor's work on the Atlas of ACT birds that it is crucial to conduct surveys at night to count this species I enquired if the drop between the 1st and 2nd Atlasses could be due to there being less Owling (nocturnal activity by birders) rather than a decrease in owls.  To my total expectation I never got an answer to my question.

There is now a fair body of information around from eBird that is publicly available so I thought I would have a look at this to see what it could say about the less uncommon owls in the Canberra area.  It turned out to be a very interesting exercise in many ways.  There are quite a few graphs in what follows, but hopefully the text will be enough to keep the interest going for the cartophobic. 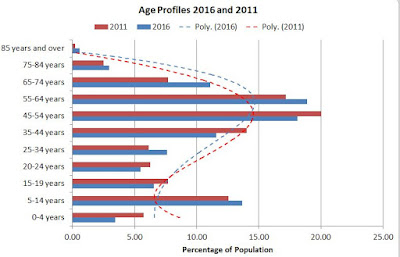 The 2016 Census results have been released today. 27 June 2017.  Not bad for timeliness, especially considering the chaos around collection day.

A note of caution:  I have subsequently discovered that the boundaries of State Suburbs have been substantially revised in this area since 2011.  The names haven't changed however so I only picked this up later when comparing population sizes and wondered why Hoskinstown and Primrose Valley had shrunk so much.  So be wary of material for State Suburb level.

Further, I found that in my earlier deliberations in making the comparison between Table Builder for 2011 and a Profile for 2016 I didn't pay enough attention to the fine print regarding what was included and what was excluded form the various tables.  Thus some of the analysis of dwellings was well wrong.  I have now corrected it 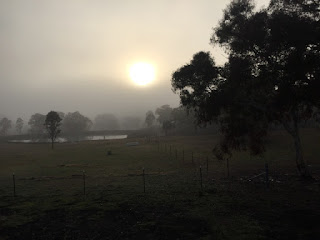 The weather has been cold so much of nature has been rather quiet.

Although we have had little rain since March Whiskers Creek has continued to run.  So has the Queanbeyan River, so Googong Dam must be full or close thereto.
On the matter of hydrology, judging by the size of the pipes QPRC are about to install under Captains Flat Rd they are obviously expecting a deluge of biblical proportions.  Either that or they have a contract to train folk for Snowy 2 and are use full scale kit rather than models.

On the 25th an Eastern Yellow Robin flew into a window and stunned itself.    It eventually flew off (or at least disappeared).
The water jet in Lake Burley Griffin is achieving good height ...  .. and with the sun in the right place a nice rainbow,
A bit of wind causing the array of flags to make pleasing snaps.

Warning: this is probably of "special interest"only.  Lots of semantics and pedantry ahead!

I quite often post in a light-hearted and unbiased way about the efforts of taxonomists to add to our understanding of relationships between members of the carbon-based world.  Actually that is not true: I really disagree with quite a bit of what taxonomists do which seems to be more about advancing their careers by boosting their publication count than actually adding to knowledge.  The archetypal model is:
Researcher A publishes a paper combining 6 taxa into 3; Researcher B then comes along and splits the 3 new taxa into 6 (possibly a completely different set to those existing before A weaved their magic);.Researcher C then reviews the whole lot and changes everything back to the way it was originally.  Neither A nor B accept this so all other researchers select which model suits them and war breaks out! The catalyst for this rant is receiving a table from my friend Ian showing the p…
Post a comment
Read more 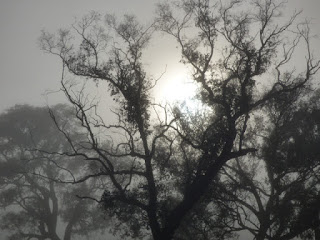 A cold and very foggy scene, quite suitable for hiding a small Scots town. greeted the 20 members who gathered on Narrabundah Lane at 9am.
Dimly visible through the vapour were large flocks of Sulphur Crested Cockatoos and Little Corellas, roosting in trees just inside the Reserve.  The birds were gradually departing in flocks of about 50 birds (and 100+ decibels) heading for their feeding grounds on the lawns and Nature strips of the urban area. It was conservatively estimated there were about 200 Cockatoos and 150 Corellas. The last group of birders (from U3A) to visit the Reserve had a near miss from a falling tree.  Some debris was still on the ground.  Other debris, a little up the track, was cockie left-overs! As we moved up through the Reserve we saw a few Kangaroos around. This was a little surprising in view of the various control activities being undertaken in the Reserve (the most lethal not being during daylight). It was somewhat surprising in view of the temperature to find s…
Post a comment
Read more

The first was on 17 June, to Bungendore to go to the Waste Transfer Station (still referred to, by traditionalists, as the tip).  On the way home I checked out the main dam on Trucking Yard Lane.  The main reason for stopping there was to check the ducks.
Especially the Plumed Whistling Ducks (or, as the property owner said recently to another birder, Darwin Ducks).  There were 21 present on this day: the flock has been around 20 -30 birds for the last while.
A huge number of Galahs were present.  They were in several flocks.  This is part of a mob on some power lines.
Here is a cropped image of the one flying in because it shows the feather positions as it manoevures for a landing
There were a couple of other flocks on other power lines and four trees with this density of birds.  All up I estimated about 500 Galahs.  Smaller numbers of Sulphur-crested Cockatoos and Little Corellas were also present.
On the Sunday Frances and I did a lap of the Central Basin of Lake Burley Griffiin.…
Post a comment
Read more

Stoney Creek and Australia in the Census 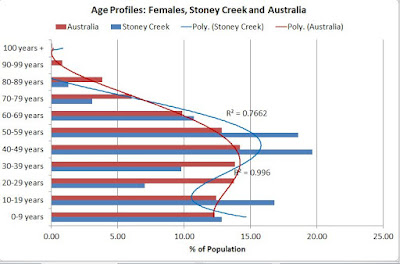 In a recent post I covered a few aspects of the 2011 Census for Carwoola and a couple of other local areas.  After posting about that on the Carwoola Community Facebook page I got a couple of suggestions that I should compare the local areas with Australia and should show information about the locality of Primrose Valley.

To deal with the second issue first, Primrose Valley with Carwoola and Hoskinstown makes up the catchment area of the Stoney Creek Gazette and I have in past posted some analysis which does show the Valley.  For my more recent effort I didn't do that as I was experiencing difficulties with Table Builder.

The first chart shows the Age profiles, for 10 year groups for females in Stoney Creek a…
2 comments
Read more

A run with my friends in Queanbeyan

Some years ago The Committee decided that defining a run by yourself as a run with your friends was an official Joke.  I think that made the total number of official Jokes about 2.  The first one was established before I became a member of caucus, let alone The Committee, and was something to do with graders near Half-way Hill on Pipe Flat Rd.  The third official Joke was to do with Roast Lamb (rated as the only thing better than a 32km rain at 4oC with light rain and a 30kph Southerly.).

So today a quorum was 1 as I took myself off for a waddle along the mighty Queanbeyan.  For such events I take my phone and record bird sightings as I go: this tends to slow the run down a bit, but I have 90 minutes before Frances has finished her Pilates Class so that's alright.  I also take a few snaps with the phone, but they aren't great art when the light is scungy as it was today.