Showing posts from May, 2016
Show All

An update on the NSW Towns project 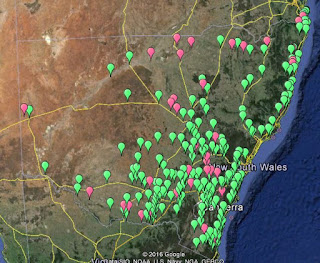 It has been close to a couple of years since I have written an overall progress report on our project to visit every town in NSW.  Although it has slowed down a bit due to:

last years long trip getting aborted due to bad weather; roads between the Sturt and Barrier Highways being closed due to rain;and us spending time at Mallacoota
we have continued to plug away,  Since August 2014 we have ticked off an extra 61 towns (thus the total is 261 visited) of which 38 have been additions to the Register of NSW War Memorials (so we have added 11 since the previous summary).  Here is where we have been (pink icons are the places we have added).
This is the remaining towns on the Register (excluding about 200 in Metropolitan Sydney, which I am cutting out as too messy to visit),
It is unlikely we will get to Lord Howe Island!

There are a few places quite close to home which we must deal with as we wander about on 'normal business'. Having done that, there are to my surprise a couple o…
Post a comment
Read more 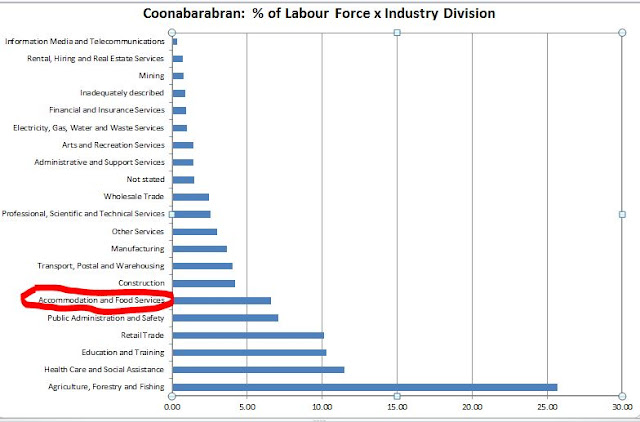 This post has flowed from:
Driving in to Coonabarabran and noticing the large number of motels along the main drag; and subsequently Discovering that the 2011 Census only recorded 68 people working in the Accommodation industry. So it was time to resolve this apparent conflict.  Of course, as will be obvious below, this leads into all sorts of other interesting fact about Coonabarabran.

A first step was to attempt to clarify whether there are in fact a lot of motels in Coonabarabran.  I passed on sites such as Tripadvisor and Trivago as I was unsure how places got listed there, but suspected coin of the realm was involved.  Instead I consulted visitNSW.  This listed 12 Motels in the town - all along the Noisy Newell.  Adding in a couple of caravan parks (also on the main drag) gives an average of about 5 employees per establishment.   This is probably reasonable as most of the places would be run by a couple of owners with a part time maid and a night receptionist. 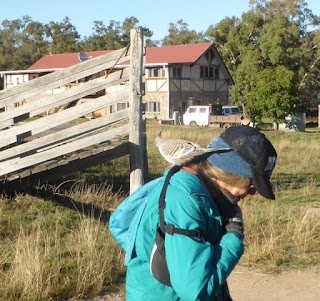 The only other time we have been here we thought about the concept of a Warrum and concluded that with a Somerset accent it could be a reference to an annelid.  As will revealed we did get a good look at the Warrumbungle Ranges today.

That followed our eyes defrosting after a very cold night: the car thermometer read 0oC but as all the water had ice on it I suspect that was optimistic.  The noises over night that I was aware of  were:
Masked Lapwing;Wood Ducks;Fox; andRooster. There were no:
Noisy TVs or air conditioners from big caravans;Drunks; orBarking dogs from nearby towns. Once we had brewed and drunk some coffee we went off for a walk.  The route we had planned got a tad confusing so we headed back to the camp to re-do the Pig Hill track.  As we got near the camp a Crested Pigeon landed on Frances and seemed quite happy to stay on her shoulder: it had a coloured band on it so I wonder whether it was a 'pet'.
Having done our walk and finished breakfast (it was now well a…
3 comments
Read more

Warruming the Bungles of your heart (?) 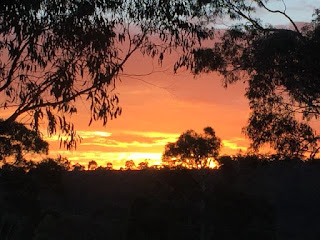 This is the first part of the report of a trip to the Pilliga area, just North of Coonabarabran, which is the gateway to the Warrumbungle National Park.  This was part of our "visit every town in NSW" campaign, although few towns were expected to be visited.  It was also hoped that I'd get some less common (in Carwoola) birds of the day.

The day of departure was a tad cool, but with a very nice sunrise.
The drive was basically a drive.  I had decided to watch for election posters along the way.  As we were going through core Nationals country I expected to see a lot of their stuff.  In fact the only 2016 poster I saw – just out of Yass - was one for Mike Kelly, our local ALP candidate.  At the end of the trip, going in to Pilliga Pottery I saw a reference to Greens in New England – I'd thought we were a fair bit West of that electroate.

Once past Boorowa we commented on how green everywhere was.  They have obviously got a good drop recently.  Most of the rest of the…
Post a comment
Read more
More posts