Showing posts from April, 2019
Show All

Water is common to this lot 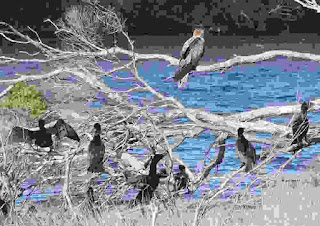 Looking from Angophora Drive this morning the sea looked rather rough by the outlet so I took myself off to Bastion Point to see if this was the case,  Nope, pretty calm despite the strong wind, but there were some white caps further out,

As I crossed Betka River I noticed a lot of birds in the Cormorant tree,  Was one of them a Black-faced Cormorant?  Nope, but there was a visitor.
A Whistling Kite, looking neater than usual!
A Great Egret, with some aigrette plumes, nearby.
Then a Cattle Egret flew in.  I have no idea what that was doing her as the nearest cattle were 6 km away.  Perhaps it had been grazing on the golf course?
I pressed on to Fisherman's Point where the inshore sea was relatively calm nut some monster waves were visible offshore (ie nearly to the horizon).
The highlight of this stage was a flyby by 2 Shy Albatross.  Only my second sighting of this species. I didn't get a photo. 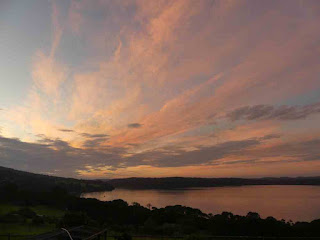 This post is about the dawn service on Anzac Day, at Mallacoota.  In view of the words of the Ode of Remembrance it seemed appropriate to start off with the going down of the sun on 24 April.


I decided that I would ride my bike over to the Dawn Service at Captain Stevenson's point.  This would be sound energy policy and test the working of my lights .  WRT the latter they worked well.  Several others had ridden over bu there were a lot of cars parked in the area near the Point.  The Lions Club had breakfast well on the go for afters.
There was a very good crowd in attendance.  My guess would be about 500 people, which is pretty impressive for a town with a resident population of 1000 and probably another 1000 visitors at this time of year.
A shirt says a fair bit of what is needed to be said.
There were very young people present ...
... and quite a few well behaved dogs.
The main speaker speaking of the experiences of a young Australian soldier in PNG.
Wing-Commander Jesse La…
Post a comment
Read more

There seems to be a lot going on this weekend.  We have never seen so many people out and about in Mallacoota, all seeming to be active, which is nice.

A good part of the crowd are the owners of some 80 VW Kombis who have gathered in town.  There has been some controversy as they were planned to gather at the oval near the Mud-brick Pavilion but instead have headed to an old soccer pitch near the golf club.

There is a fair connection between Kombis and hippies and the decoration on the vans tends to reinforce that link.

Quite a few of them were sporting Historic Car (or Car Club) number plates.  Apparently this means they get concession registration, but can only be driven a restricted number of days per year.   comment on the community Facebook page suggested one of them ( a rarity with 21 windows) is priced at $150,000!   (Note I said priced at, not "worth".)

We went to the Market which was much bigger and busier than usual.  There were a lot of dogs around for Tammy to …
Post a comment
Read more 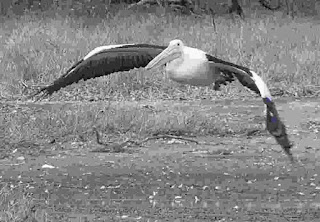 A naturalist friend from Canberra commented that one can never have too many photos of pelicans,  So here are a couple more, taking off from Rabbit Island.

Continuing with commentary on Cattle Egrets, I saw a few (perhaps a dozen) with cattle as we drove past Mangans Lake on the way to Mallacoota yesterday.  This morning (19/4) there were two on Rabbit Island and a short while later about a dozen at Bucklands.
There was commentary of the Mallacoota Birds Facebook page about flocks of juvenile Crimson Rosellas feeding on lawns.  This lot were opposite our house in Angophora Drive.  I counted 19 in total plus a couple of adults in the shrubs.
There were also some Galahs with them and we had 2 of that species feeding on our just-mown lawn.
I cropped a close-up of its head to try to identify what it was eating and it looks like generic vegetable material.
At Bastion Point about 1715 a White-bellied Sea Eagle flew over ...
.. against the sunset, which was really spiffy. 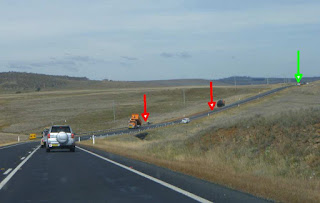 We headed back to Mallacoota of April 18.  The traffic was quite heavy with lots of caravans on the move.  Presumably this reflects the school holidays and the coincidence of public holidays meaning that by taking 4 days off work you get an 11 day break.

The photos which follow were taken by Frances as passenger.

There were a lot of roadworks around.  This lot, between Cooma and Nimmitabel demonstrated some of the annoyance of the activity. We were already about 400m past the flag person (from [Don't] Care Traffic Services)and the far end of the blocked area is shown by the green arrow.  About 1000 metres in total.  The work area is between the red arrows - perhaps 100m?
At least there was work going on, and it is a good idea to keep motorists away from bitumen spraying.
Throughout the drive the poplars were well turned in colour,
Somewhere after Bombala, and after the obligatory warning sign, we met a mob on the long paddock.  They were finding plenty of feed on the verge.
A …
Post a comment
Read more
More posts