Showing posts from August, 2017
Show All

Plants that are about to be bulldozed 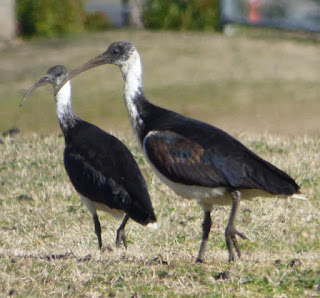 On 29 August I had to take the Pajero in for a recall so had a couple of hours to fill.  I decided that a walk along the proposed route of the Queanbeyan bypass would fit the bill rather well.

Strolling through the streets of Queanbeyan to get to the area I recorded 14 species of birds.  The most interesting were Straw-necked Ibis on the sports fields on Old Sydney Rd.
These birds can be common, and in large flocks but in the recent past have not been so.  I suspect they have all been out west, taking advantage of the floods from 2016.  Neither of these two have the eponymous straws on the breast and they look glossy (but not Glossy).

Once in to the base of the escarpment I found quite a bit of stuff in flower.  The most obvious species was Acacia genistifolia.

Acacia dealbata (Silver wattle) was also evident but I didn't photograph it.  I am pretty sure  - based on the juvenile leaves - that this was Acacia rubida.
Definitely a bean, (family Fabaceae) possibly Dillwynia sericea.
…
Post a comment
Read more

Why you need a 4x4 (and other environmental problems). 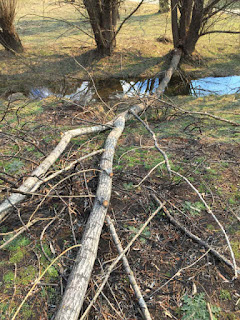 I took the Pajero in to Queanbeyan today to get the passenger air bag replaced under a recall due to some Japanese mob building them so that could explode.  That was done so that to quote the fixer "You can do a few ram-raids now.".  My response was that it was more like I won't get killed if I hit a roo.

When I got home Frances reported that a willow had fallen across Whiskers Creek.  Yes, good eyes that woman!
After a bit of chainsaw reconstruction (see below) I shortened the trunk a bit and positioned the Pajero.  With my trusty rope (found at the Captains Flat tip many years ago) I channelled my inner Boy Scout and remembered how to do a clove hitch.
Actually I have just recalled that the official Boy Scout  knot for dragging timber is a round turn and two half hitches.  Whatever  - I did a clove hitch.

In fact I did two: one around the log and the other around the towbar.
In case you wonder about the spiffy shirt it came from Aldi.  Hi-vis is all the go out here.  …
Post a comment
Read more

Snow and other unusual weather 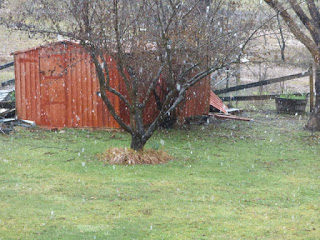 The Administrator of our Community Facebook Group posted a warning about the forecast weather for today.  She included mention of snow down to 800m.   In fact it made it down to at least 780m.
The area of precipitation was quite extensive as shown on the BoM radar image ...
... and even more so on this Weatherzone image.
Interestingly with the weather coming from the SW(ish) the Victorian selection on that site was more informative today, than the NSW/ACT selection.

As well as the snow the drop in temperature after 11am was quite pronounced.  So was the switch in wind direction and pick up in speed through the late morning.
I'm normally a bit cautious about wind data from my site but those data match pretty well what I had noticed on the Plain mid morning.
So far we have scored 2.6mm of rain equivalent in total.  It is now 1320 the temperature has soared to +3oC and it is back snowing again.
By 1350 the precipitation was up to 3.6mm and the temperature had slumped back to 2oC.  Although…
Post a comment
Read more 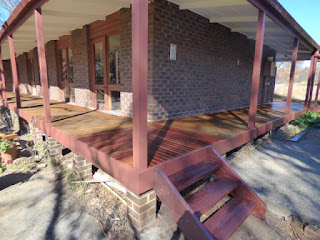 Over the past couple of days some tradesmen from ACT Trade Services have been doing the painting and deck oiling required on the house.

They have done a very fine job.


They were also tasked to replace the burnt sleepers in the vegie garden.  Again very well done.
As well as being very competent at their trades the guys were very pleasant people!
Post a comment
Read more 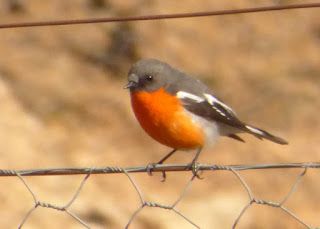 With today being Daffodil Day I thought I'd get out early (ish - 0615) and see if the daffodils down our drive were emulating a Flame Robin ...
... in being bright-eyed and bushy tailed.  (Truth in advertising: that photo was taken a couple of days ago at about 0800.)

Unfortunately they were instead copying Mr Sun, or Old Man Kangaroo ...
... (ibid) in still stacking a few zeds.
Perhaps they didn't appreciate the overnight low of -3oC?

An hour later the thermometer had risen to 0oC but the jonquils were still frosty, and looking a tad unhappy.
By 9:300 the basic Daffodils (King Alfreds) were looking more as flowers should on their Day.
So were a couple of a flamboyant variety down by the Creek.

Egg-layers seen on a trip to Bungendore 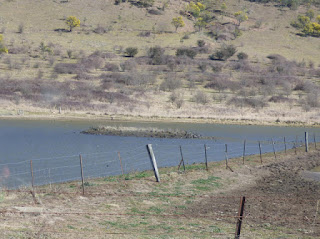 After visiting the tip to make a deposit I swung by the big dam on Lake Road.

In view of the very dry year we are experiencing I was intrigued to find that the Big Dam on Lake Rd has still got a lot of water in it.  This image shows the smaller section of the dam and the start of the berm under the fenceline. I also found this morning that the grass on the roadside has died down (or been mown) so that I was possible to park  level with the end of the bank through the middle of the dam (as shown in the image).  This meant I got much better views along the fence line than are possible from the traditional spot opposite The Lake.
There were at least 6 groups of Freckled Ducks which I counted up to 112 birds - and I suspect there were a few more.  I also counted 116 Pink-eared Ducks some of which were chilling out on the banks while others were feeding in a big group or in pairs doing synchronised spinning.  This next image shows part of one of the flocks. The other big flock were 89 Eurasia…
Post a comment
Read more 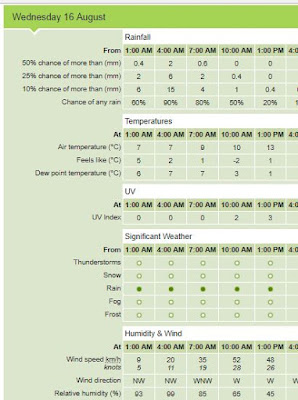 Do not panic: this post will get to some birding stuff eventually.

That blog title was adopted before the walk, as a consequence of the forecast strong winds.
In fact the BoM Extreme weather warning indicated the Canberra area was going to miss the worst of the winds (average 60-70 kph, gusting to 90kph).
However it still seemed likely that any birds coming from the Burra direction would be going at a fair clip.  Rain was forecast for the early morning and it was, like the trains on the Rock Island Island Line "right on time" such as 0430.
Hopefully it will be done and dusted by the time we start walking.
Of course the weather was the second "adventure" in getting this outing on the track.  The first was an article in the Canberra Times by Bryan Pratt saying that the London Bridge entrance to Googong was to be closed at the gate, thus saving the cost of opening and locking the gate each night.  However that turns out to just have been a brain explosion by someone …
Post a comment
Read more
More posts