Showing posts from September, 2010
Show All

Plants of the Mulloon Fire Trail 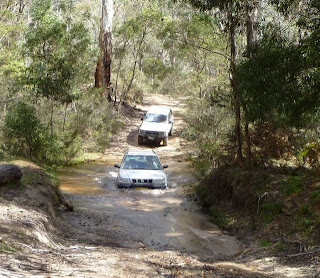 This was a Wednesday expedition by the ACT chapter of the Australian Native Plants Society.  In due course a report on the outing including a plant list, bird list and lotza photographs will appear under the "Wednesday Walks" tab in the linked site.

The Mulloon Fire Trail runs from the hamlet of Forbes Creek to the locality of Bombay (as far as I am aware there are no moves to change its name to Mumbai) in SE NSW.  There are a series of ridges along the way with most of the track being between 900 and 100o m AMSL.  The track is in reasonable condition with:
quite a few exposed rocks which could do quite a job on low exhaust systems and and suspension parts;a crossing of Mulloon Creek which was about 30cm deep (and we haven't had any rain for 2 weeks); andconsiderable evidence of large trees having fallen across the track at various times (some not too distant). An illustration of point 2 is given in the excellent photo taken by Frances.  See the comments for an alternati…
2 comments
Read more

Work and other things around the property 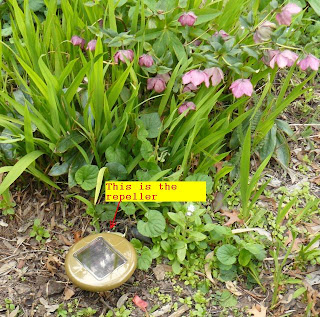 Today was quite a busy day for us on a number of fronts.

A first step was to get some seeding happening as reported in this.

I then did some orchid hunting and identification as covered, with a lot of other stuff, here.

We also, hopefully, took some helpful actions regarding the small dog and the local reptiles.  The main part of this was to install 3 snake repellers.  I have positioned them so that they form a band covering the width of the garden, and with any luck they will stop snakes from coming anywhere that Tammy goes without direct supervision.

We acquired them through the local agent of the manufacturer whose contact details will be made available on request.  Frances reckoned they sounded - from the description - like the 'thumpers' in Frank Herberts 'Dune' series (but in reverse since the vibrations dissuaded, rather than attracted, the target species). 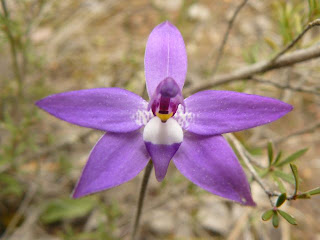 This post will start of with the Waxlip Orchid, Glossodia major.  We have had good 'crops' of these in the past and are expecting a bumper flowering this year.  We looked at the prime spot yesterday (24 September) and there were lots of buds, but no actual flowers.  This morning I found one flower and became duly excited:
A couple of hours later I wandered up to show this seasonal first to Frances and found at least a dozen plants fully open.

Part of the reason I was in the area was finding this bud on the 24th.  It is on its own, about 200m from any other Glossodia of which we are aware.  A couple of friends with much more expertise in orchids have suggested this is the likely ID but have suggested 'patience'.  To me?
We will see.  On the way back to the house I found another Cyanicula caerulea on a dry hillside.  They are turning up everywhere, which is not a bad thing!

Trying to keep this more or less in chronological  order, when we went to check the mystery on 27 …
1 comment
Read more

Native heath and a few other things 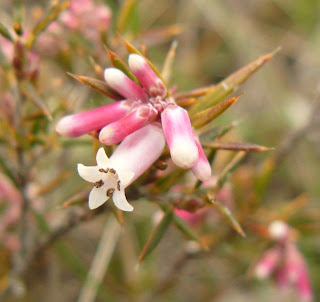 As the weather has warmed up (and country people will know that a wether never gets warmed up) we have got a lot of heathy blossom appearing.  This post includes some photos of heaths and other flowers (and concludes with other evidence of reproduction) from our middle paddock.
The next image is the first "pea' to appear in the block.  There are quite a few plants but they are generally sparse in habit.
The next three images are from the same paddock but are not really heathy plants.  I have included the Early Nancy (Wurmbea dioica) image to give an impression of the density of these flowers: we have many patches 20m sq at this density! As well as the flowers this paddock includes a fairly low quality dam.  However it is well supplied with frogspawn at present. 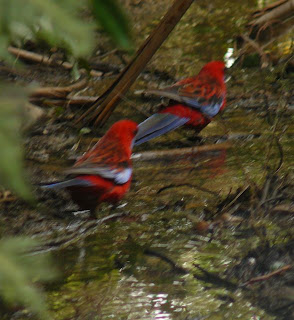 COG has sponsored a bench seat in the Australian National Botanic Gardens (ANBG) in memory of the late Tom Green.  Tom led the Wednesday Walks for COG until his untimely death, and was also a stalwart of the Friends of ANBG.

The seat has been positioned very well, on a nice shady path just up hill from a wet run off area.  These factors combine to make it a brilliant place for birding since the water attracts birds to drink (or wade in)
and also creates an insect friendly environment bringing in some other species for a feed.  While I was sitting on the seat for a few minutes today there were Superb Fairy Wrens all around, Yellow-faced and White-naped Honeyeaters calling nearby and a Shining Bronze-cuckoo calling from a little further away.

The next track down was the site of the famous ANBG Powerful Owl of a few years ago.  It is also the spot from which one can see an active bower of a Satin Bowerbird.  When I first arrived I saw the adult male bird resplendent in his satin blue fi…
Post a comment
Read more 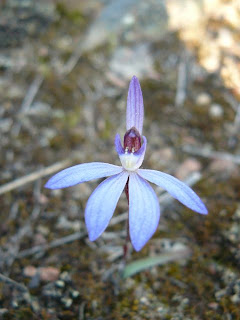 This morning (22 September) I responded to Denis Wilson's post about bird orchids to the effect that we had lots of orchid leaves here but nothing in flower.  Then I took the small dog for a walk and found a blue orchid, which used to be called Caladenia caerulea but was then subject to taxonomic adjustment (the politest word I can think of) but is now known as Cyanicula caerulea. I took Frances back to show her - we had only ever seen 1 of this species on our property - and found about 50!!  YOWZA!

Here are some images:

After that exciting start to the day we went on the ANPS Wednesday Walk to the Bullen Range.  Here we found Golden Moths (Diuris chryseopsis) and the pink not-caladenia (Petalochilus fuscatus).
A couple of days later (24 September) I found a Golden Moth on our property.  This may be the first of these I have ever seen here.
1 comment
Read more 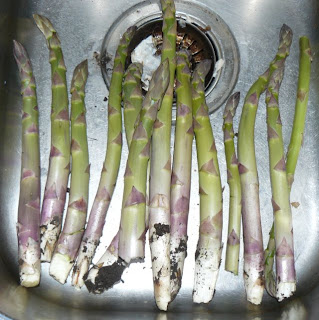 How do you know when Spring has really arrived?  When you can't get a park at Bunnings!  (For the benefit of non-Australian readers this is the Australian equivalent of Wal-mart.)

So today was the first day of getting stuck in to the vegetable garden for me.  This was basically digging in some of the soggy bits, in the hope that this will help the soil to dry out. Otherwise we will be planting rice!

One of the areas was subject to a small experiment, in that we covered the area with equine faecal matter (EFM  - aka horse poop) in Autumn to see how it encouraged the fertility of the soil. The main thing I noticed was that each forkful of soil I dug had 2 - 4 worms visible in it.  Since I regard a high worm population as a good indicator of good soil this area is brilliant, and the experiment is a success.    (I had also dumped the EFM on the areas we planted our new daffodil beds and they did seem easier to dig than in the past.)

Variations on a theme of Daffodils 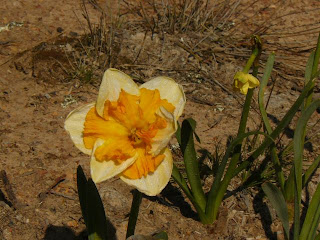 I have commented elsewhere (for example here) about Frances' great work in planting a host of golden daffodils.  Today I just took photographs of the ones that were not simply golden King Alfreds (although we do have a bunch of them).  I must also confess that I wasn't lonely at all, let alone like a cloud, when I took the snaps as I had a small black and white smiler to keep me company.

After the first year Frances has purchased mixed packets of bulbs from Hancocks, her preferred supplier.  As the following images show, they are certainly a mixture!  Of course one doesn't know what is which so it is always a nice surpise when they come up!