Showing posts from November, 2014
Show All 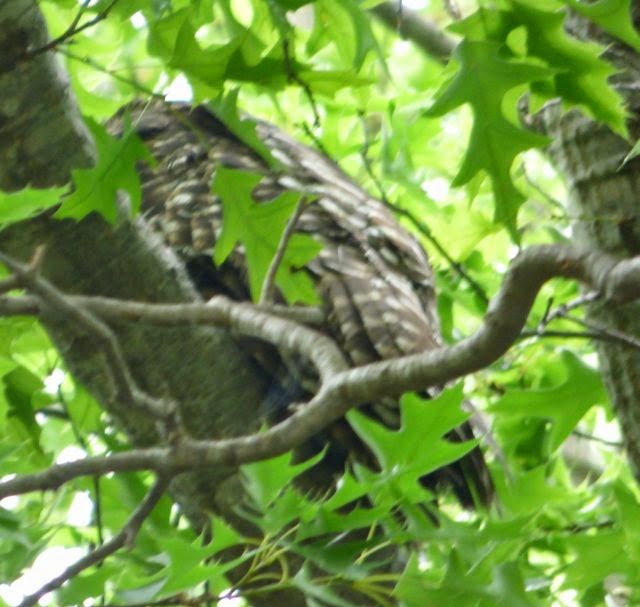 A few years back it was conventional wisdom that Powerful Owls only existed in the Canberra area in the Brindabellas.  Then a bird of this species was found in the Australian National Botanic Gardens by a group on a beginners bird walk - fortunately led by an expert who recognised the bird and alerted many others.  Many folk (at least 400) flocked to the Gardens to see it.

A year or more later another bird (of course, possibly the same one) was seen in the Rainforest Gully of the gardens.  Again many people went to see it.

On 27 November 2014 a very alert COG member looked up after noticing a guano patch on a bike path past the North Canberra Bowling Club.  There was a Powerful Owl sitting high in a very tall tree.  It has been seen by many people in the following days.  I joined that number this morning.

My first view was from the back ...
... and then by stepping into Haig Park the front.
I have clipped the following image from the preceding one to reveal the talons.  This also sho…
Post a comment
Read more

Where do Koels come from? 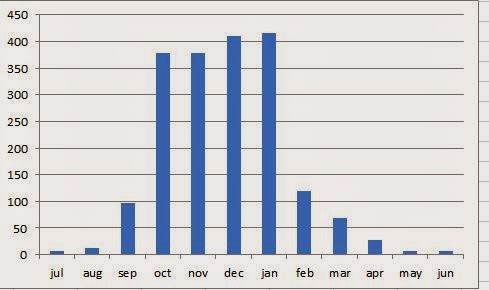 Anyone that has answered "Eggs" should report to the Headmaster's Study after the lesson!

This post has been stimulated by a couple of soundings of (what is called this month) Australian Koels.  The first was in Orange on our recent trip and the second in our front yard in Carwoola.

The latter observation was the second, in 8 years, on our property although the species has been reported somewhere in the Carwoola area in 6 of the 8 years.  Reports have tended to be in November or December.  Perhaps it is significant that we are 200m higher than Canberra and our plums are still way off ripe.

When I reported my latest sighting to the COG chatline a member commented that they regard Koels as an urban bird, including country towns such as Cowra and Goulburn.  He noted that there could be plenty of fruit - do Koels eat strawberries? - in a rural residential area like Carwoola to bring them in.  (They might also be aware - by whatever means Koels are aware of anything - that N…
Post a comment
Read more Note: a number of clarifications and corrections have been made after comments.

Today the ANPS WW went a long way East to Tianjara Falls.  Those who felt like a bit of scrambling went a bit further East, as will be revealed.

On arriving at the junction of Touga Rd and Highway 92 we found that conservation, NSW style, was occurring.

If they are trying to improve fire prevention its a pity they didn't pick (or indeed, as I originally typo'd "lick") up this lot of rubber stuff.
Three snaps of Leptospermum sp.  This first one is yet to be identified to species.
The next two are L.rotundifolium

Small dog syndrome is a myth 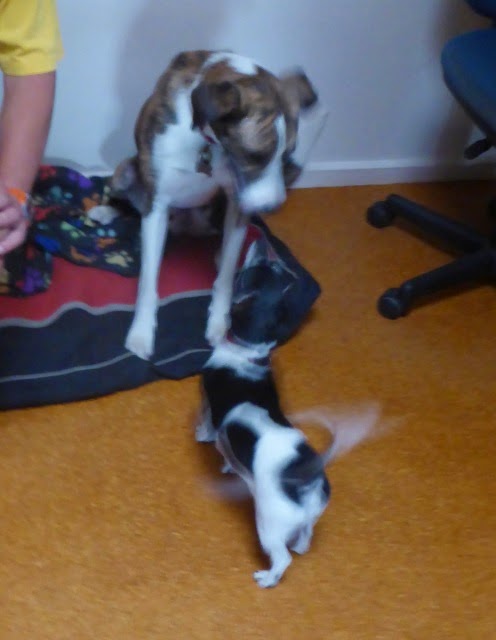 As regular readers will be aware we own a small dog. one Tammy by name.

Some friends acquired - what they were expecting to be - a modest sized dog with some whippet in its genome in the recentish past.  That is called Boson, since he was acquired about the time the Higgs Boson was nailed down.

As is often the case with rescue dogs, history has shown the providing agency really had no idea what the puppy is going to turn into.  I think the whippet element is probably correct - judging by his size I suspect the rest is something of a mastiff nature.  He is a very affectionate beast albeit with a tendency to behave like other Danes would refer to as a svinekotelet.

We have been intending to introduce the two dogs but I have been a tad nervous due to the size differential and cutlet potential.  However today the planets lined up and the two met - initially in our friends family area.
It was well done that Rob was poised to tackle Boson (as I was for Tammy if she went feral) but in the …
Post a comment
Read more

The seed for this post came on the way home from our trip to Orange.  We had three encounters with road works on that leg of which the classic started just South of Boorowa.  A sign warned of roadworks ahead and the speed limit was reduced from 100kph to 80kph as a result.  I realise that there are two reasons for slowing down for road works:

the safety of those in the vehicle; andthe safety of those doing the roadworks. After about 2km there was no sign of any activity relating to point 2 and point 1 was thus also null, so I resumed cruise control at 100kph.  About 5 km down the road another set of signs appeared (possibly augmented by one suggested that Mr Plod may be doing some monitoring).  Ignored on the basis of experience.  Possibly about 15km South of Boorowa we finally found some guys doing something with a backhoe, possibly using up half of the North-bound carriageway.  So I slowed down while in the area.
This led to some discussion of our past experiences with the descendant…
Post a comment
Read more
More posts