Showing posts from January, 2014
Show All

Late afternoon at the dam (and on the deck) 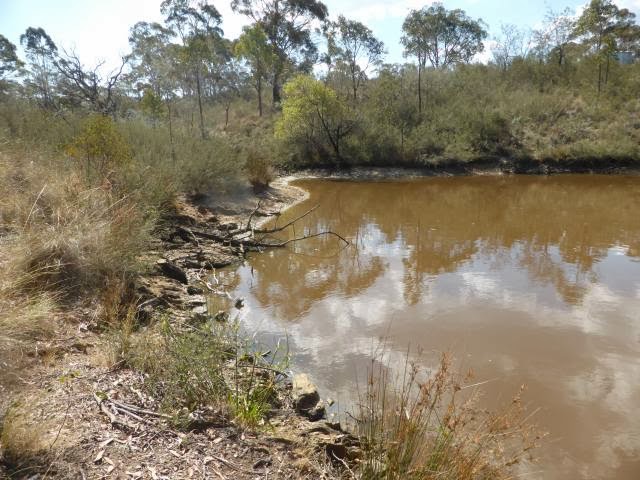 As regular readers of this blog will have noticed it has been rather dry recently.  Our top dam - spring fed - is showing a large rim of mud.  The nearest dam is as low as I have ever seen it.
This sword - which we found in our garage when we moved in 7 years ago today - was completely under water when the dam was full.  I positioned it as a depth gauge and a Camelot joke.
I spent about 30 minutes (at 36oC) sitting by the dam to see what could be seen.  A dragonfly was very cooperative in posing for photos.

This grasshopper seemed to caught by the wind and landed in a rather damper place than intended.
While not exactly a Waterhopper if did seem to be doing a pretty good job of propelling itself towards the bank.  I lost sight of it so don't know if it:
made the crossing;sank; orwas gobbled by a tortoise which I have seen in the dam. Ants seemed able to scoot across the meniscus and climb up twigs. It was interesting that when this one was in situ the dragonfly wouldn't land.  …
Post a comment
Read more

Up the Mighty Naas on a push bike 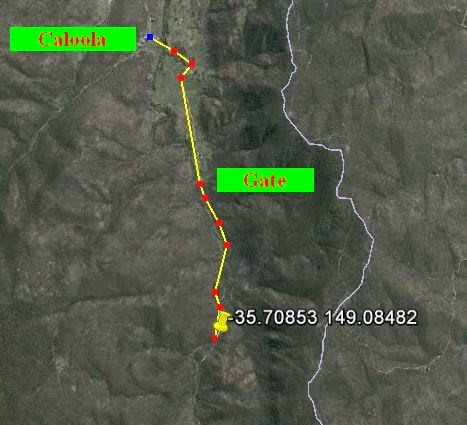 I had recently proposed a trip up the Naas Valley Fire Trail as a possbility for the ANPS Wednesday Walkers.  I did so with trepidation, not having explored the area in the recent past.  The proposal was not taken up at the time for very good reasons.  As I did find a window in my busy schedule today for an explore of the route you get to read about the voyage.

But first a little personal history.  I have done the 27km length of this trail from Mount Clear to Caloola Farm in the distant past.  I did that as a car shuffle with 2 friends.  We dropped one car at Caloola and loaded all our bikes onto my car. We then drove about 25km down Boboyan Rd noticing a good fall of snow on the side of the road (that was mid-Winter).
About 300m after the start we crossed the Naas River for the first time: it was about 20cm deep so rideable. After about 10km one of my friends chain broke.  He decided that the best solution was to run pushing the bike on the uphills and coast on the downhills.  As he …
Post a comment
Read more 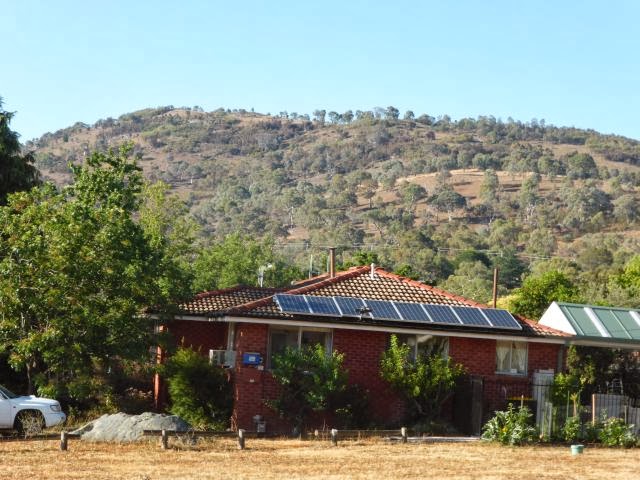 In the Southern parts of Canberra Mt Taylor dominates the scenery,
more or less forming the boundary between the townships of Woden and Tuggernong.  I have run around the fire trail at the base of the mountain many times but have never visited the summit.  So having a few hours  to spare while the Jetta was serviced in Woden gave an opportunity to remedy the omission.

The initial path was between two sets of houses following a shady reserve under some power lines.
Getting close to the start of the Mount Taylor Reserve I came across this sign honouring Ben Chifley, a Prime Minister after whom the suburb was named.


A Grey Butcherbird posed nicely.  This species has become relatively common in the urban area after the 2003 bushfires obliterated their former breeding habitat in the Ranges.
Then we got to the business of ascending the Summit Fire Trail.  It was rather steep, but had been bitumenised, presumably to make it easier for servicing the communication facilities on the summit.  Th…
Post a comment
Read more

Raining in my heart

For those that cannot remember 1959, and wonder about the title here is a link to an elucidatory article on Wikipedia.

A common feature of a heart is that it gets broken (and then retires to run a pub).  So it has been with rain recently: forecasts of showers or rain periods 6 days out turn to dust with two days to go.  Our top dam is as low as we have seen it.
Following the old English proverb of "Red sky in the morning, shepherds warning." the day of the 24th looked quite promising.
The single image on the radar in the earlyish morning (0930) looked quite promising
but checking the loop function showed it to be moving SE so likely to miss us.  So it did.  I went into Canberra a little later and there were occasional sprinkles.  In the afternoon these continued, and spread to Carwoola so that we were up to 2.4mm by 1530.   At this point the radar looked good.
I couldn't see how we could miss with that.  We didn't - getting 6.8mm, putting the month to date up to 7.…
Post a comment
Read more

ANPS does plants on Settlers Track 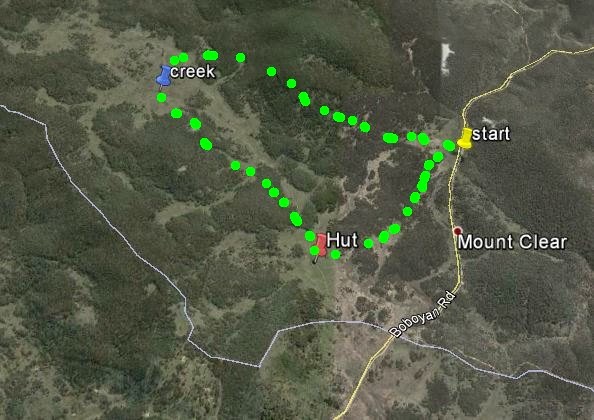 It being half-way through January, and reasonably cool, the first ANPS Wednesday Walk for the year went to the far, far Southern end of Namadgi National Park.  Just how far South is illustrated in this Google Earth snip, with the faint blue line being the Territory border.The tasteful green blobs are approximately the official walk, with the Hut (Westerman's) being visited at the end.
Another Hut (Brayshaw's) was very close to the start.
We have walked here before seeing a rather different range of plants.  The initial thrust of this blog is members of the family Asteraceae, named after the pommie garden species 'Aster'.  For some reason there is a vernacular trend to call them Daisies: this is obviously an error as if they were really "Daisies" the family name would be Daisiaceae so some further pedantry is in order.  A first specimen was Helichrysum rutidolepis.
The only Olearia I recorded today was this O. phlogopappa, which must win some sort of award f…
Post a comment
Read more
More posts