The Garden of the House of Franmart 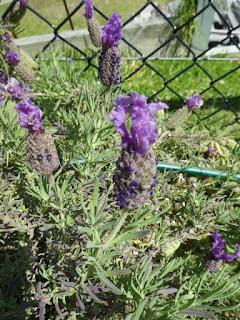 Here are some flowers (and occasionally fruit) in our garden at present.  I will just put the photos to start with and follow with text.  The basic order is exotics followed by "natives": ie plants wihich might occur naturally in Australia, Lavender is flowering prolifically. A Euphorbia is also doing well after being split last year and transplanted around the garden. A Canna keeps up the struggle I think a Protea. Chtysanthemums: bought nearly dead as a throw-out special from Bunnings.  Doing very nicely, thank you! Grapefruit flowering nicely a few weeks after being seriously pruned. The orange tree is still flowering despite ... .. being laden with fruit. A Grevillea. Another Grevillea Prostanthera doing a reasonable job of hiding the tank. A purple flowering shrub of which I can't remember the name.  Also hiding the tank. A daisy! I think this is a real native A self-sown Acacia.
Post a Comment
Read more 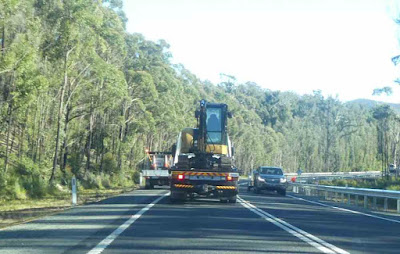 This post covers our visit to 'Lakes' on 2-3 August 2021.  This kept us within Victoria so road works were to be expected. That lot were OK as there was actually work going on.  A later section, of about 3km of "traffic hazard" marked down to 40 or 60 kph, was not acceptable and ignored by everyone.  Obviously Rural Roads Victoria have not absorbed the meaning of one of Aesop's Fables . A 3 minute delay happened at Cann River where some Police checked that we were not breaching the Health Reguations.  This was no surprising and a good idea as one road block covered both Princes and Monaro Highways.  Our situation was non-standard but the officer worked it out quickly and was very pleasant and sensible.   Down the road a bit (just before Nowa Nowa) an unusual looking vehicle tagged on behind.  I couldn't initially work out if it was a Police car or not but rigorously obeyed all speed limits.  Eventually I was able to become certain it was.  It followed us right
Post a Comment
Read more

Mynas and the pox 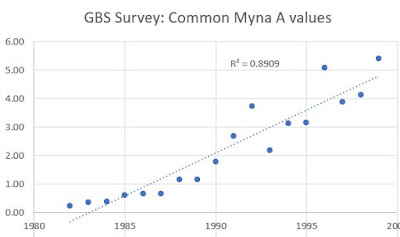 In a discussion of the spread of COVID I, possibly unwisely, drew an analogy between the disease spreading down the Hume Highway and the spread of Common Mynas.  That led to an interesting comment on my Facebook page which requires a little more work to show the situation more fully. Interested readers might like to peruse the website of the Canberra Indian Myna Action Group (CIMAG).  The vernacular name of the species is now officially Common Myna but the Action Group was formed using the old name (and it has a snappier acronym). I joined COG in 1983, shortly after arriving in Canberra.  Either in that year or the next I saw m first Indian Myna (as they were then known) in our yard at Scullin.  Discussing this with the then manager of the Canberra Ornithologists Group (COG) Garden Birds Survey (GBS) he said that the species was mainly confined to an area around Green Square in Kingston with a secondary flock around the Scullin Medical Centre (about 300m from our house. The populatio
Post a Comment
Read more
More posts