Showing posts from February, 2019
Show All

One of the interesting birding sites around Mallacoota is the track along the Airport fence to the Gun Club.  We have seen quite a few interesting species along there from time, including a Ground Parrot on one occasion.  Just recently it has been rather thin: last time we drove around we didn't see a single bird.

That changed a bit this morning.  OK, it changed quite a lot!
First up I saw a bunch of birds with white rumps swooping around.  I stopped the Pajero to look at them (failed, they'd swooped on by) and as I looked up there were a couple of quail-beasts on the track. Zooming in showed them to be Stubble Quail - the first I have seen in the Mallacoota area.  Checking with my eBird download it is only the 5th time they have been reported to that site in this area.  Woo hoo! Then I caught up with the white-rumped rascals.  Tree Martins - 14 of them. 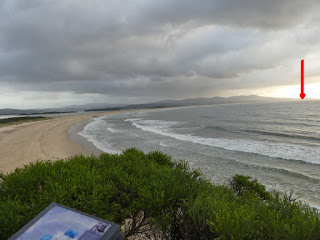 Pretty flat I'd have to say. A few weeks back there was an exchange on the Mallacoota Birds Facebook Page about the Howe Flat Track.  The Flat itself seemed quite an interesting site as shown by the latest eBird checklist.  I offered Frances a trip there but somehow the idea of 6+km along the beach to get to the start of the track didn't excite her (or at least not positively).

Here id the view from the starting point (Bastion Point).  The red arrow points to the start of the track.
I had roughly measured the distance as 6km, using Google Earth.  Going out I did two checklists for the Bastion Point area (1.5km) and the remaining distance (~4.5km).  Coming back I measured the whole distance with the eBird track measuring tool and it came to 6.17km.
As I set off there was a reasonably large patch of washed up kelp with a lot of sea-tulips (I think Pyura sp) mixed in with them,  Being chordates they tend to rot smellily and attract many gulls to feed on the mess.
At the blockin…
Post a comment
Read more

More metal birds than feathered ones? 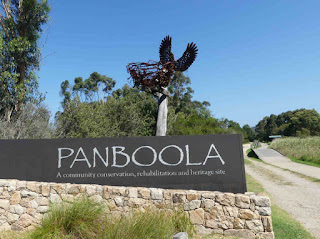 I drove to Merimbula yesterday to collect my bike from bike hospital.  I don't recall it being serviced while we lived in Carwoola so it was probably due!

I decided to take a look at Panboola Wetlands as I was passing.  This is the entrance off Bullara St in Pambula.
A close up on the metal bird statue.
The place is mainly quite dry, especially towards the race course.  I saw more of it than I intended as they have lots of mown paths but little in the way of signs.  When I eventually found the bird hide I regretted schlepping my telescope as it was of no use.
The reeds look to be a big problem through the Reserve.  An attempt has been made at Tips Billabong to trim them back but it seems to have reduced the height not the number of plants.  I think they are in big trouble (as is Kellys Swamp in Fyshwick),  There was a small patch of open water with a handful of ducks,
There was also a modest (~1000 animals) fruit bat colony.
After picking up the bike I found an interesting dri…
Post a comment
Read more

Suzi and the trip back 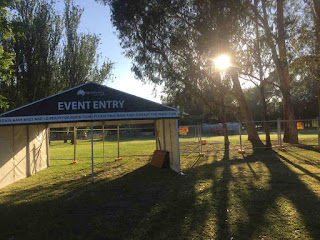 On 22 February as we did our dog walk I noticed a lot of action around Stage 88.  On asking a worker she advised it was a touring concert scheduled for the 24th, featuring Suzi Quattro.  I'd almost be prepared to go along and listen to her!  Not sure how much visual appeal there would be, given that she is  nearly my age!  The line up also features The Angels - again my age and I used to see them (for free, other than the cost of the beer) in their earlier manifestation as The Moonshine String and Jug Band at the Sussex Arms in Walkerville.

Frances commented that rather than pay I could go and sit at NGA (1.4km away) .  The volume should be just bout OK there!  This reminds me of hearing The Wailers at Roosevelt Park in NYC.  They would definitely have been audible in Jersey City (astonishingly also 1.4 km from the concert).

Here is what the venue looked like on 23/2.
Interestingly the tickets cost $68 for General admission and $130 with 'uninterrupted view".  Given that …
Post a comment
Read more 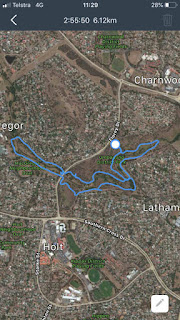 Among many good statements by the famous Australian bush walker (and purveyor of kit for same) Paddy Pallin was the title of his autobiography "Never Really Lost".

Seen on a screen-map the area looks as though it would be hard to get lost in with the Creek as a dominant feature and being surrounded by water.
One confounding factor is that some maps show Dalley Crescent as going from Florey Drive to Southern Cross Drive.  In fact the bit around the Creek, hatched in red, doesn't exist.
Some further geographic confusion might get mentioned below.

About 30 members gathered on the Western bit of Dalley Cr, Latham for a "figure of eight" tour of this reserve.  The initial stages of the walk were pretty quiet and we took an off track excursion to look, unsuccessfully for indigenous axe- grinding grooves in some rocks by the Creek. A family of Willie Wagtails ... and a small flock of Red-browed finches being highlights as we crossed Ginninderra Creek for the first tim…
1 comment
Read more

Lighting up the sky 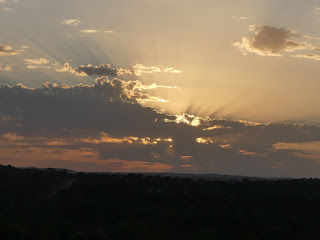 This is a set of photos that I took at each end of 19 February.

The ones of dawn are mainly included for the various forms of dark sunbeam, which I think are actually the shadows of the clouds.

In the evening Frances happened to be looking out towards Mount Ainslie and saw the large moon arising.  Of course I had left my camera in the Jetta, 15 floors down, so the moon had risen a bit by the time I could take a photo.
There are two interesting bits in this.

The spot of light low on the right is a plane just after take off from Canberra Airport.  I didn't think to check FlightRadar to work out where it was going!  There is also a dark spot directly above the summit of Mount Ainslie (almost at the edge of the cloud.  That is a fruit bat from the colony at Commonwealth Park.  (Again I don't know where it was going, but a friend who rescues the bats that get caught in netting etc says that they regularly turning up in Giralang - about 8km in a straight line from the roost.)
While …
Post a comment
Read more
More posts