Showing posts from May, 2015
Show All

I have posted before about the eBird Big Day.  The dust has now settled and the results by country are available.  I thought it would be interesting to see how the results appeared when looked at when adjusted for the population of each country.

The first challenge for a bear of little brain such as me was to get the results for each country.  After an  email from me a quite prompt and friendly (probably more friendly than I deserved) email from eBird pointed out that it was already available - they gave a link but there is also one lurking on the webpage (Click on 'World" then scroll down until "All countries" eventually appears, and bingo).

A quick copy and paste into Excel, remove the histograms and upload to ACCESS.  (By fiddling with the date I also got a full eBird list x country, which will also feature below.)  So that was half the data I needed. 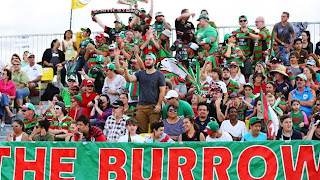 After a couple of weather induced postponements (and, for me, other absences so numerous I was surprised people still recognised me) the ANPS Wednesday Walkers gathered at a property in Western Burra.

I wanted an alliterative title for this post so thought to use the name of the gathering place of intellectuals, movie stars (eg the nice Mr Crowe), leaders of the country (eg Mr Albanese) and movers and shakers of the corporate world  (eg the nice Mr Holmes a Court Jnr) at South Sydney Rugby League matches.  I don't think any of those gentlemen feature in this photo.
A highlight of the visit was the huge old Eucalypts.  This E. meliodora was very close to the cottage.
Down by the dam was one (or possibly two) of the biggest E. bridgesiana I have ever seen.
There were relatively few flowers around today, as is to be expected from the time of year.  Ros agreed that this was Wahlenbergia communis.
This was also a Wahlenbergia but of uncertain specificity,  The swelling is probably…
Post a comment
Read more 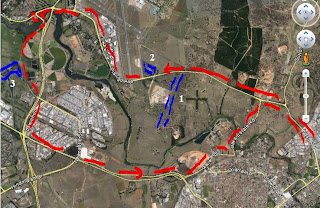 As I noted in my post about BirdaDay I went for a birding bike ride while my car was being serviced in Queanbeyan.  The route is shown in the following map: my birding bits are in blue while the transfer bits are in red.  It totalled to 30km on the bike.
Point 1 is the area referred to as Newline paddocks.  Most of my distance, and most of the diversity, were accrued here along the lane, which is a private road, although the owners/lessees involved don't object to people birding down it.
Close to the start of road there were a few puddles which attracted thirsty birds including the best of the day, two Fuscous Honeyaters.  (The 'black eye' effect was very obvious.)

As is obvious from the map image it is close to Canberra Airport and usually gives good sightings of aircraft coming or going.  As it was a tad early in the day this hot air balloon was still doing its business - and seemed to be getting bit close to becoming a hood ornament on a 737!
As the area along the lane…
Post a comment
Read more

On 23 May it is looking pretty much as though my participation in the Bird-a-Day challenge for 2015 is about to grind to a halt.  I have 11 birds that I reckon are almost certain to be seen the area around home and a further 12 that are prospects in the urban part of the ACT.  If I can struggle through to 5 June (13 days away) there is a prospect of some coastal birds which might get me through to last years failure date of 11 June.

Comparing the species seen in 2014 with those in 2015 I found that there were 50 species seen last year that I haven't got (so far) this year and 34 this year that I didn't locate last year.  I haven't been able to isolate the reasons for this but was quite surprised to see that several of the species in both lists of "differents" were birds seen on the trips to Adelaide in both years.  This seemed to reflect the different routes followed, with birds such as Major Mitchell's Cockatoo and Yellow Rosella being logged on the trip ac…
Post a comment
Read more 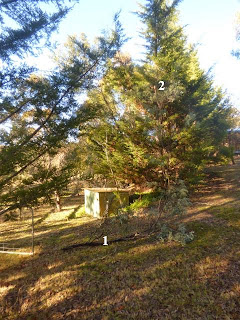 We lived in Ottawa in 1990 and 1991, and remember the time with great pleasure.  One of the highlights was realising how common beavers were in the area.  Some points:
We had been there less than a week and went for a walk along a path below Parliament House.  There was a beaver swimming across the River!Go forward about 9 months and I took a bunch of visiting European Statisticians to the swamp adjacent to the Brittania Water Treatment Plant.  The guests were very excited to see a beaver: the Norwegian said something like "We have to go a long way from Oslo to see one of them!"When Orienteering in the forests it was important to aim for the dam on beaver ponds: that was a nice run across a swamp whereas crossing upstream involved wading a significant depth of water.They were also common in the suburbs and the City sent teams out with dynamite in Spring before the steams started flowing to blow up the dams which would otherwise flood houses.  This meant we were quite used to …
Post a comment
Read more 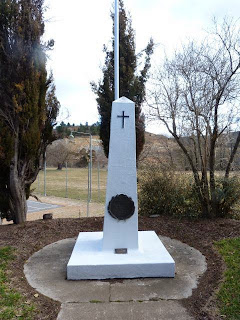 I decided that putting my illustrations into the same post as the text of the poem (Smalltown Memorials, by Geoff Page) would distract from the poetry so here they are.  I have, in the spirit of the poem, largely restricted the images to memorials in smaller towns.

"Just the obelisk" Captains Flat, about 50kms by road from Canberra.

"A few names inlaid"  Tumblong, on the Hume Highway SW of Gundagai.
"More often full-scale granite", Deniliqin in the Riverina (SW NSW) "A marble digger" Walgett -between Bourke and Moree, (NW NSW) "a thickening of houses"  Hill End, North of Bathurst "a few unlikely trees"  O'Connell (near Bathurst).  In this instance the trees themselves are the memorial. "A marble digger" Walgett - between Bourke and Moree in NW NSW
"The next bequeathed us Parks and pools" Scone - a larger town, in the Hunter Valley.
"Demanded stone" Coolac - recently by-passed by the Hume Hig…
Post a comment
Read more
More posts