September 30, 2011
The Black-shouldered Kite (Elanus axillaris) is not an unusual bird in the Southern Tablelands of NSW.  They have been rather scarcer during the recent drought but have reappeared in the last few months.   As usual they have been seen in 1s and 2s although a friend and near neighbour had reported a flock of 6 watching him do some work in a paddock.

Another near-neighbour rang me yesterday morning (29 September) to report that she had a flock of 6 roosting near her house.  As both properties look out across the Hoskinstown Plain, and are only 1km apart as the Kite flies, it seemed highly likely that they were the same birds.

However on the evening of the 29th my friend rang to say that the flock had grown to 14 and were roosting in a single tree.  He had taken a photo: 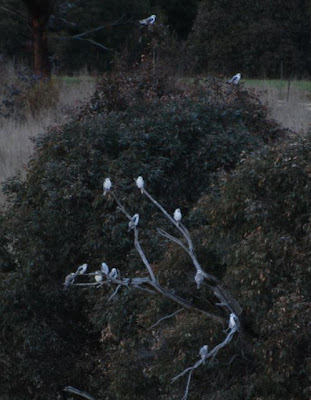 By the time I got to his property the flock were on the move but I still got to see most of them.

While deserving the term extraordinary such a flock is not unheard of.  Wikipedia refers to a feeding flock of 70 birds of this species and HANZAB refers to groups of up to 30 being reported.

Unfortunately we couldn't turn them into the closely related Letter-winged Kites (Elanus scriptor) which is more commonly seen in flocks, but is mainly a bird of the arid interior.  They do irrupt across the country occasionally when the population of rats, on which they feed, crashes.  According to HANZAB major irruptions have occurred in 1951-53, 1976-77 and 1980-81 and the weather conditions seem about right for a repeat.  As this would be a lifer for me I am hopeful! 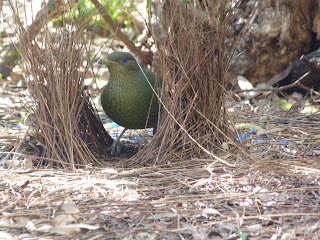 Having some time to spare today I went to check the bower near "Tom Green's Seat" in the Australian National Botanic Gardens.  The bower was well occupied by what I take to be - based on the green plumage and yellow bill - a 5th or 6th year male Satin Bowerbird.  (With all these images, click on them for a bigger - unfortunately not better focused picture.  The shots were taken hand held on full zoom from about 10m distance into a fairly well shaded location.) He was very much engaged in adding to the construction. Then it seemed that another bird called from the bush above.  This led to a whole lot of activity: the most spectacular (and worst imaged) was a flash of the wings: The bird also did a fair bit of hopping around.  Given that it was still immature I called to mind the greatest traditional Irish song of all time: Diarmuid O'Leary and the Bards performing Lanigan's Ball .  This ditty refers to spending "6 long months at Brooks Academy learning
Read more 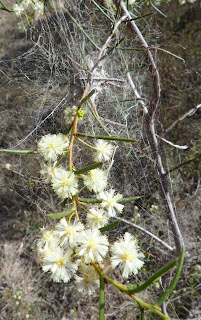 The ANPS walk to day went to the Gale Precinct off the Old Cooma Road, immediately to the South of the current limit of  suburban development.  This area is managed by Queanbeyan Landcare in association with the Council. Proving that even I can learn from past mistakes I will begin by commenting that there were a bunch of Acacia species brightening the area up more than somewhat today.  Let us begin with Acacia genistifolia : this is getting close to the prickliness of the African Acacias (which we now know are not 'really' Acacias at all but a different genus- yet to be named). Next we have another spiky number Acacia ulicifolia .  Note that although prickly the spikes are much less unpleasant than those of the previous species. With average luck this next one is Acacia rubida .  This seemed to be getting the good nectar seal of approval from various insects.  Unfortunately it was a tad draftyand I couldn't get a good shot of the various arthropods as they took a
Read more

February 26, 2012
This is a bit off the usual topics covered in this blog but man doesn't live by nature study alone, so please bear with me! Movies As part of my Christmas presents from our daughter I was given a  2 month subscription to the Quickflix service.  In essence one selects movies over the 'net and they ship DVDs out to you.  We had been to the movies about twice in the last 20 years so this seemed a bit strange but we have now watched about 15 movies in 7 weeks. Before getting to a few comments about some of the films I will deal out a large bouquet to Quickflix.  I suspect that we - living a little remote from postal; services - could probably get 2- 3 films a week (perhaps 10 per month) which for 2 viewers at $23 a month works out to about $1 per seat.  One of the discs they sent was buggered which I reported on line and within 2 minutes had a return email saying another copy was on the way which I see as very good service. Review time I wont go through all the films but
Read more