Showing posts from May, 2013
Show All

The (sort of) traditional view:
On Googling 'mistletoe' I came up with a bunch of links to an alleged song by someone called Justin Bieber who I believe aims his work at the wannabe Princess market.  I have never heard him warble so I shouldn't criticise.
Adding the word 'cartoon' to the search came up with some more helpful works, although many of them were obviously done by people with better skills in art and humour than botany.  Even at very low resolution I can tell that is Holly (Ilex aquifolium) - the red berries are a big hint - rather than the common mistletoe (Viscum_album)  with white berries, employed to encourage a little of this and that and, if you are very lucky, the other, around Christmas.
There is nothing like starting a post with a screen full of irrelevance!  Taking text from Wikipedia "Mistletoe is the common name for obligatehemi-parasiticplants in several families in the orderSantalales. These plants attach to and penetrate the branches …
Post a comment
Read more 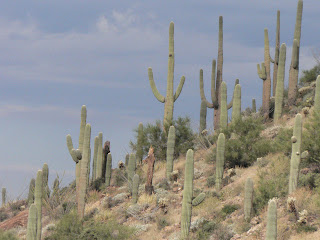 Just joking: it wasn't quite that dry today!  Enough with the Carnegiea gigantealet us move on to the foothills of Mount Majura.

The weather was fine and even the clouds were very high cirrus - very much fine weather clouds.
Things weren't that fine on the ground with a fairly typical TAMS sign warning us off.  They can't even be bothered to give the plant its correct name as the endangered taxon is L. a. tricolor.
Not only were the plants extremely common over a large area  they were even in flower in some parts!
We next have a puzzle.  I encountered a very nice Kurrajong (Brachychiton populneus) with very attractive red petioles (which most other members of the species seen today also showed).
However about 4m away was another brachychiton with yellow-green petioles.  Why is this so?
An Acacia implexa was flowering!  Poor confused thing.
So was an Eucalyptus meliodora (most others just had buds).  I am sure they normally flower in Summer.
Here is a very dry patch of…
Post a comment
Read more 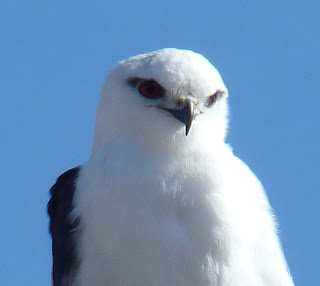 Today I wandered over to Bungendore to see what was going on on the damp spots.  In essence, much the same as last visit except no Shelduck near Trucking Yard Lane and more Freckled Duck at the Lake Road dam.  On the way back a Black-shouldered Kite posed nicely on the powerlines.


After lunch I visited an area near Fairbarn in Canberra.  The bird pictured against the blue sky there is an immature Grey Butcherbird.
The dead vegetative matter is the tip of a redwood tree.
Here is the foliage of one of the trees.
This notice explains much of the history of the plantation (click for big),    This webpage also explains a little more.

Albury trip Day 1: Getting to the Southern Border

The last time we really took a trip to the Southern border of a country we were interested in the work of Homeland Security and got assistance in speaking to shop assistants from some blue rinsed ladies who had better Spanish than me (which ain't hard to achieve).  That was Nogales AZ.

This is Albury NSW.
We left home in Beauty on time at 8am.  The temperature was about 0C and fog seemed to threaten, but never actually delivered.  Rain also threatened during the drive and occasionally did deliver, but the VW automatic rain detector was well up to this.  So were all other systems – I was driving and thus had the information system on instant fuel consumption.  This is a great slope detector: if it is above 5l/100km you're going uphill!
Our first stop was Tarcutta, about 10km past the split between the Hume and Sturt Highways.  We found the RSL and its two field guns but they didn't seem to be designated memorials.  The big memorial in Tarcutta is the Truckies Memorial.