Showing posts from June, 2008
Show All 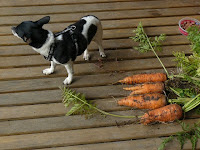 This is really a pure "stream of consciousness" witter to record a few things.

It is June 22nd and we have just picked - off vines hanging in my shed and Frances potting shed - the last of our tomatoes. Frances bought some at the market on Friday, the first time we have done so since January.

Today was also the day that I went to participate in the annualTidbinbilla Lyrebird Survey. This is the third time I have done, after the shock of the first event when it snowed heavily. I had a couple of folk with me and neither had previously got close to a lyrebird in full performance mode. That got remedied today as we were within 15m of one yelling its heart (and various other organs) out. It mimiced at least 5 other species as well as doing a major rattle of the tail feathers.

On the rodent (see previous post) front, matters have been variable. She is not sleeping well after about 4am so we are getting woken early. She has also taken to what used to be referred to by a Canadian…
Post a comment
Read more 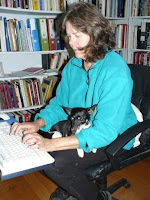 Apologies to Bill and Ted. Apologies also to Tammy who actually seems to have more intelligence (but less moolah) than those worthies.

About 10 years ago we had to put down our dog Boney due to kidney failure. As it was becoming increasingly hard to travel anywhere with a dog we decided we wouldn't have one, much as I love the animals. Some fair time after that Hilda, Francie's Mum, acquired Tammy, a small pooch which I quite enjoyed taking for walks etc when we visited Adelaide.

I think as a result of this it was announced that "If anything happens to me Martin will take the dog." One of those statements that cannot be answered in the negative. Now that Hilda has had to go into care that particular vulture has come home to roost.

In fact the dog's adventure started with wings as it was decided that Adelaide was too cold for the dog and it had to be transported to Canberra. No-one was driving over in the near future (and on our next trip we're coming back via B…
Post a comment
Read more 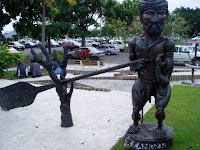 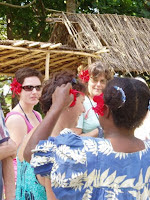 These photographs show in the order I put them, and heaven knows what Blogger will do with them: 1) our welcome to a village where we watched 2) a 'custom dance'; 3 the entrace to the Waterfront Bar in Pt Vila; 4) Pt Vila Harbour: 5) Pt Vila Market; 6) a cermonial Cheifs house near the National Museum; 7) Local transport back to the village; 8) epiphytes on a fig tree.