Showing posts from March, 2018
Show All

March 30, 2018
I have read some interesting books recently and have a couple more goodies just picked up at the library.
Bird SenseThis book by Tim Birkhead is extremely interesting if one is interested in birds (or indeed sensory issues with most anything - in many cases the author draws on other orders to show the development of knowledge about birds senses).

Unfortunately it had to be returned to the library so I can't give chapter and verse on specifics. An issue that struck me particularly was in the discussion of sight where it appears that some species have good long-vision in one eye and good close vision in the other.  This is explained in terms of structures in the eyes not simply an individual bird having issues.  This somehow explains why Peregrine Falcons usually stoop in a swerve to the right!  There was also discussion of the sense of being able to recognise magnetic fields.

My only quibble is that in many cases I wish he had included the quantitative data, as either a table or a …
Post a comment
Read more 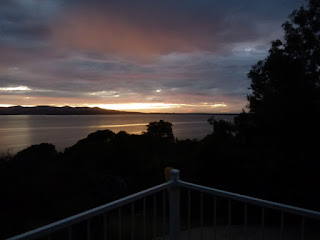 Reflecting on the trip we quite enjoyed it, despite the weather, like the Jets in West Side Story, having a social disease.

Bird of the trip was Australian Gannet, which I rarely see at Mallacoota.  However on this trip they were visible from most beaches.  Possibly the foul weather brought them in.  Runner up was Rose Robin: they are often around the area but we got a good look at a very pretty male, rather than just hearing their distinctive call.Missing in action in the bird department were Scarlet Honeyeaters: I'm not sure if they migrate but I didn't see or hear a single one.  (Possibly this reflects the lack of the flowers they prefer.)

To my surprise, on checking eBird we recorded 84 species for the trip. 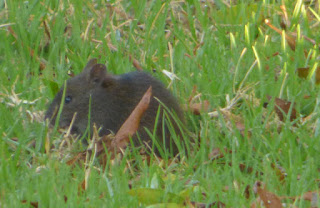 .. it might still be a rat!  Shades of Andrew Sachs and John Cleese!

Each morning that we have been down here when we pass the Southern end of the Lagoon boardwalk a small dark mammal has bolted from near the boardwalk to the nearest bush.  ​I discussed this with a naturalist friend from Canberra and he thought my description was closeish to  Broad-toothed Rat Mastacomys fuscus.  He noted that it is usually thought of as restricted to the high country but has been found at sea level on Wilson's Prom and there is an 1880's record from 10 miles NE of Cann River.

This morning (about 8:15) I got a snap of it. My friend thought if looked pretty much like Mastacomys fuscus.  So I have referred the issue to a batologist who works for the Victorian Environment folk.  The batologist has now expressed a view:
"While I find it difficult to be sure from just one photo, I would think, from the look of it and the location, that it is a Swamp Rat Rattus lutreolus.  It is difficult to tell…
Post a comment
Read more

Variations on a theme 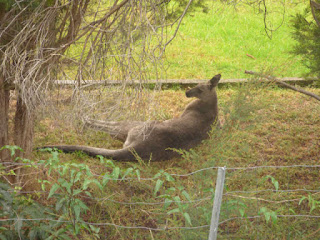 One of the memorable bits of "Apocalypse Now" is the quote by Colonel Bill Kilgore (played by Robert Duvall):
"I love the smell of napalm in the morning." On this trip to Mallacoota it could be updated in various ways.  The most obvious is "I love the smell of bat-poop in the morning".  It could be closely followed by "I love the sound of rain in the morning."  (Keeping with a theatrical theme we drop back a few decades to Tennessee Williams and a possible title of  "Rain on a hot tin roof" but the roof isn't too hot at present, and there isn't any of that Deep South stuff going on in Mallacoota - at least as far as I'm aware.)

These two things came together on the morning of the 25th as it was raining before sun-up and the bats were flying low over the house on their way back to the roost.

The rain meant there was no colour in the sky in the morning, and indeed the day was pretty grey, drizzly and dispiriting until latish …
Post a comment
Read more 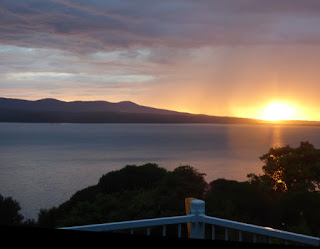 No, this is not about my personal endeavours!

In fact I was a little less active than usual today, thanks to the battery in the Pajero celebrating its upcoming 5th birthday by crapping out.  Fortunately the RACV (since we're in Mexico) came good and arranged for Mallacoota Automotive and Towing to come and a) test the battery and b) get me to their shop to replace same.

How did this affect my activities you ask?  It meant we didn't get to our new start point which involves a drive, but reverted to traditional values and walked from home.  For some reason this meant Tammy spat the comforter and we turned back after 1 km rather than 4!

That all occurred slightly after sunrise.
As herself was fragile the larger members of the household left her at the house and went for a walk to Bastion Point.  At first this seemed rather quiet (in terms of wildlife: there were plenty of surfers and pooch walkers around.  Then Frances spotted a Caspian Tern.  The usual flock of Little Black and …
Post a comment
Read more
More posts